Sister in the house

I spent Wednesday working with a mum to be who is suffering from Pelvic Girdle Pain (PGP).  The poor darling has been on crutches since the beginning of January and the baby is not due for a few weeks yet.  I cooked up a storm.  It was so lovely to open a fridge full of food and a store cupboard full of spices.  Wonderful.  But I digress...

It had been a long week to date (long fortnight really) and I was getting to be beyond tired.  So I made my first mistake... I planned an early night.  I should never plan an early night.  As soon as I do it is bound to fail.
I had a call from my early March client (a repeat client) to say that she was having erratic contractions.  So an early night was a good plan in theory.  I'm convinced she saw me lay my head on my pillow because as soon as my eyes closed... the phone began to ring.   Her husband was on the line.  The contractions were getting worse and they didn't feel safe with their midwives.  Could I go immediately?  Of course.  I jumped out of bed with a fond "farewell pillow" glance.  I grabbed my book, a bottle of water, my ipod, my keys and my homeopathy kit (in case she wanted to use it).  I called the cab and was off.  It was 11.30pm.
When I arrived at the house F, her husband, welcomed me with a big hug and kiss and a whispered "Thank God".  I hugged her mother and immediately introduced myself to the two midwives, one of whom was a Sister/Nun belonging to a religious order (I forgot to ask which order... daft Doula).  I explained who I was and they looked at me as though I had interrupted something.  Mum was upstairs on the bed contracting away.  The MWs had been unable to give her a vaginal exam because the pain was too much.  This meant that MW1 wouldn't let her get into the birth pool because in her words "protocol says you have to be 5cm or I can't allow you in the water".  MWSister meanwhile, was trying to find the foetal heartrate by continually prodding Mum with the handheld sonicaid.  She did not turn it off when she was finished so the calm, quiet room was filled with the hissing and the hum of her electrical aid.
I could tell that the dynamic was wrong and that Mum was fearful of giving birth.  Dad told me later that the MWs hadn't introduced themselves and that both he and his wife had hoped they would leave.  So my job at this birth was to calm the "troubled waters" and provide a sense of safety for Mum and Dad.  Dad was no retiring wallflower.  His protective stance was one to behold (and stay the right side of).

Mum was breathing through her contractions nicely.  Dad was breathing with her and reminding her to relax and to keep doing the wonderful work she was doing.  Grandma was going in to settle their 3 year old son periodically.  MWSister kept attempting to get the foetal heartrate and calm was restored each time she had.  Me, I was re-reading Pride and Prejudice (which is on the Kindle app on my phone) and waiting.

After a while I suggested to Mum that she might like to use the toilet to empty her bladder a little.  My main thought was that a little mobilisation would be good for both her and the baby.  She had been rocking on on fours on her bed for a while.  Getting up was really good for her.  She didn't manage to empty her bladder but she did feel the benefit of the short walk and went downstairs to the birth pool.  MW1 still wasn't happy about her getting into the pool so Mum and Dad stood beside it and the contractions continued to build apace.

Mum decided (with some gentle persuasion from me) to let MW1 attempt to check her progress.  I have to confess I wasn't sure why MW1 needed to as many of the community and homebirth MWs I've worked with are pretty fantastic at looking at their ladies and knowing roughly where their labour is at.  So, we moved over to the couch but Mum refused to get on her back for the exam and told us... "she's moving down.  She's almost here."  At this point evidence of her pushing began to be seen and a discreet wiping up of debris prompted MW1 to say she might as well get in the water.

Oh the looks on MWSister and MW1's faces as Dad whipped his kit off (leaving a fetching pair of cloth boxers on for our modesty) and got into the pool with Mum.  She held on to him and breathed.  Oh it was such a beautiful sight.  Neither MW knew quite what to do, but there was nothing that needed doing.  They were simply having a baby.  Just thinking back on it fills me with shivers.  It was amazing. This was a husband and father's love in action.  Dad said "I can feel her coming".  The  MWs and I reminded Mum to keep her bottom in the water for the birth.  It wasn't long before a wee girl slipped into the world at 2.23am.  MW1 had been shouting "Don't touch the baby as it comes out, you'll stimulate it!" then when she arrived she shouted "Grab the baby.  Bring the baby up".  I leant in to Mum and said "Take your daughter.  Bring her up into the world".  MW1 reached in to look at the baby and to look at the cord.  Dad asked her to stay back as he was unwrapping the cord from around his daughter.  Mum put her new daughter to her breast where she almost instantly began to nurse.

Eventually Mum and Dad got out of the water to await the arrival of the placenta.  MW1 wanted Mum to hand the baby on to someone else, but Mum held her tight and with Dad's support they went upstairs to the bathroom.  A bowl was popped into the toilet and we waited for the placenta whilst Baby Girl fed.  The MWs stayed downstairs having asked us to let them know when the placenta came. After about an hour MW1 called up the stairs to say that she would have to give the syntometrin injection because it had been more than an hour.  I looked at Mum who said "It's coming now" and with a loud whoosh, the placenta dropped into the bowl.  It was huge!

Mum and Dad went back to their bedroom where MWSister did the quick baby checks and weighed Baby Girl.  Mum, Dad and Grandma all cuddled in bed as the MWs gathered their equipment and left.

What I love about homebirths (apart from the miracle that is birth of course) is Mum, Dad and Baby curled up around each other in bed.

When I left the house was full of wonder and joy.  Another beautiful birth and a Baby Girl with no set name.  I was thinking Mars! 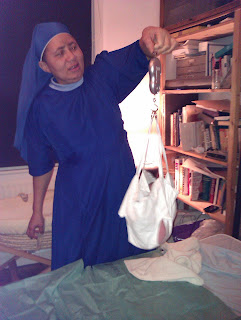