Ask Me About Breastfeeding Twins (part 1)

Ask me about breastfeeding twins

That's one of the profile pictures on my Facebook page this week.  It is World Breastfeeding Awareness week (or World Normal Feeding Awareness Week as they say on Mothering Mutiples:Breastfeeding and Caring for Twins or More page )
So, I suppose I ought to respond as though I had been asked.
On a parenting forum I was called smug when a woman asked about breastfeeding twins because she'd heard nothing but horror stories.  I replied that it was much like feeding a singleton except that there were two babies, but fortunately we have two breasts.  A non twin mum jumped quickly up to call me smug and tell me that I had NO concept as to how hard breastfeeding twins was.  Sadly tone doesn't carry through the printed word and no one could 'hear' me smiling as I responded.  I have, of course, helped many women with breastfeeding their twin babies and nursed my own until they were 18 months old.  And I still believe that it is as simple as having two breasts.  Now fret not, I am not some kind of narrow-minded freak who doesn't recognise that there are sometimes difficulties in breastfeeding, be it twin or singleton.  I just believe that we should start with the premise that it is as simple as having two breasts and work from there.
So, let's start with healthy, term babies, the ones with no health issues.  Actually, I think we need to start some months prior to this.  I think (and remember these are my opinions) that breastfeeding twins starts with preparing ourselves to nurse them.  Almost from the moment people find out that they are pregnant with twins the naysayers appear.  "You'll never manage to feed twins, it's too much", "You won't have enough milk to breastfeed twins", "I never managed to exclusively breastfeed twins, don't feel bad that you need to use bottles", "No one can breastfeed twins".  This is the time to get yourself informed.  There are many places where you can get good information.   The National Breastfeeding organisations, like The Association of Breastfeeding Mothers, The NCT, The Breastfeeding Network, La Leche League all have helplines, websites and literature.  There are of course the various twin and multiple birth networks as well eg TAMBA and The Multiple Birth Foundation.  There are some wonderful websites full of information about breastfeeding like Dr Jack Newman, How Breastfeeding Works and Kelly Mom.  Of course the growth of social media has simply opened us up to more information (though do be careful about your sources as there are some out there who are simply in it to make a quick buck and their information can be downright dangerous).  I shall quickly name a few favourites, but this could take all day, so I really will just post a few. Dispelling Breastfeeding Myths, Mothering Multiples:Breastfeeding and Caring for Twins or More, Breastfeeding Basics, The Leaky B@@b, Best for Babes Foundation and Lakeshore Medical Breastfeeding Medicine Clinic.
A lack of understanding about breastfeeding and breastmilk tends to be the common denominator for discouraging twin mums when it comes to nursing.  I remember sitting with one of my clients after she had given birth to twins.  The first had fed beautifully and she was feeding the second.  A lady from the MBF (Multiple Births Foundation) came to see her and her opening words were not what either of us were expecting.  "Don't worry if you can't breastfeed twins, not many can.  I, myself, gave bottles.  It's good to get them started".  Fortunately my lady knew that she wanted to breastfeed and she had done her research and knew the key to producing enough milk for her daughters.  Feed, feed, feed according to their cues. 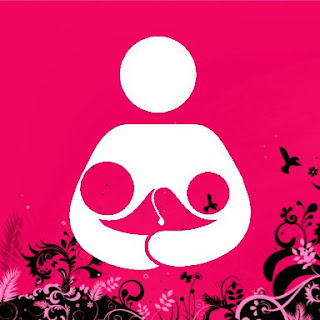 It may well be incredibly tiring, but that doesn't mean that you can't do it.  Get your support put into place.  Some twin mums swear by maternity nurses.  If this is a route you decide to take, make sure your MN knows how breastfeeding works.  I recently had a client who was relaxed and breastfeeding beautifully when I left her.  I went back a few weeks later after she had had a MN in.  She had been told that in order to have things 'work well' she needed to put the babies on a feeding schedule and breastfeeding was only encouraged 6 times a day.  Believe me, when you are a twin mum, some form of order is more than tempting.  Fortunately my lady knew that a lot of what she had been told to do wasn't helping.  Her milk supply didn't seem as good and her daughters were hungrier than they had been.  She recognised that it was the feeding schedule and went back to cue feeding.
The same things that apply for nursing a singleton apply for nursing multiples, a few tweaks here and there perhaps, but the basic information about breastfeeding remains the same.
So, for now, assuming that your babies are/will be healthy newborns, put them to your skin and inhale the wonder of them.  Let them feed on cue and should there be any difficulties at all, get help immediately.  Often it's a simple issue, with an easy solution.  Use your helplines, call an IBCLC, call a Breastfeeding Counsellor, talk to experienced breastfeeding twin mums. Let your information be good and something that helps and not hinders you.
There is more to come, but for now let's start with two babies, two breasts.  You can do it! 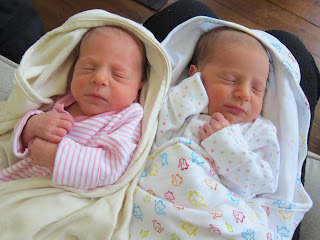