How the Consultant (Grinch) Stole A Perfectly Good Birth

What happens between the antenatal class and the birth?

I hear lots of conversations, comments, curses and scornful laughs about birth plans.  I once saw a twitpic (picture on Twitter) of a laminated birth plan.  The tweeter (person who tweets/posts on Twitter) said 'It's laminated so that the doula can wipe the blood off of it'.  You can imagine the joy that filled my heart at that comment!

What's wrong with having a birth plan?  Who does it threaten?  My own thought is that women write birth plans to articulate the things that they would like to have happen during their labours.  They have thought carefully about what they want to have happen and what they don't want to have happen.  A typical birth plan includes their desire to move freely in labour, to ask for pain management if they want it, to do skin to skin with their baby, to not have the umbilical cord cut prematurely.  Is that too much to ask?

I was at a meeting once where a woman, who had yet to have children, literally screamed with laughter at the 'stupid women who have airy fairy plans for their births, like they know better than anyone else'.  My heart continues to sink.

I have spent time with women who have felt let down by their Consultants.  They have had reassurance all the way through the pregnancy and then, as if a transplant has taken place, the Consultant becomes the harbinger of doom.  Suddenly everything is prophylactic.  Things must be done to prevent the chance of anything happening.  Confused?  Here's a simple example.  A mother goes beyond her EDD (estimated due date).  She hasn't given birth on the day her pregnancy reaches 40 weeks.  Clearly there is a problem.  Inductions are talked about and booked.  'Well we don't want the placenta to calcify and the baby to die.'  Dramatic?  No, just something that women are told when they question induction.

The 'dead baby' card.  That's what I think happens between the antenatal class and the birth.  The Consultant that hands over a box of tissues before saying 'my way or a dead baby'.  The refusal to explain the risks of induction and instead the reiteration of the risks of going beyond 40 weeks.  That and the 'It's twins, you'll have to have a caesarean' conversation with a low risk twin mum.  Oh wait!  There's no such thing as low risk twins.

What happens between the antenatal class and the birth?  The de-humanising of the mother.  The 'I will not allows' and the 'these are the four positions you are allowed to give birth in' conversations mid labour.  The 'asking' to perform a procedure, whilst performing said procedure (ie "I would like to break your waters" and like that the waters are broken.  No chance for mum to answer).  Am I exaggerating?  Oh I really wish I were.

Of course every Consultant is not like that, but there are days when I wonder.  Why do so many traumatic birth stories abound?  This is the point where despite all that the mum to be has learnt and researched her power is handed over.  She becomes willing to listen to and do everything that she is told.  Again I'll say, if medical intervention is needed, then get it, accept it.  I want to hear more good birth stories, stories where women keep their confidence in their bodies and their trust in their Health Care Professionals. 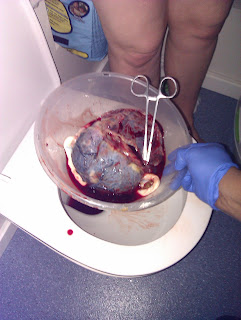