If I say that my Spanish is rubbish, I fear I'll be overstating my competency in the language.  I have been thinking about fear in birth for a while and about induction.  Today I was pleased to read Jesusa Ricoy-Olariaga's blog "Induciendo el miedo" today.  When I say read a Spanish blog, think google translate/bing kinda read.  Oh you get the picture.  My substandard French is positively fluent in comparison.

So Jesusa has pretty much written the blog that I want to write, but I'm going to put my thoughts down anyway, because then instead of ranting and raving over it, it will be a little more measured and stop my head from exploding. 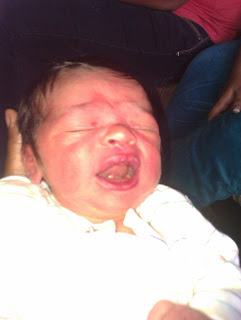 Another email about induction dropped into my inbox today.  A lovely young couple expecting twins.  Mum healthy, first twin head down, babies a good size.  She has been informed that she must be induced or have a caesarean at 37 weeks.  The reasoning? The hospital's protocol doesn't allow for twins to go beyond 38 weeks and if she doesn't book her slot now, there will be no slot for her.  I wish I could say that that were an extraordinary utterance, but I can't.  Heard exactly the same from another twin mum just a few short months ago.

When this couple first got in touch with me, they were excited about the fact that they were expecting twins.  Every communication since has included fear and worry.  I don't know how many times they've been told that the second placenta will fail.  Or how many times they've heard that twins never go to term.  One of the reasons that they booked me is because they want as 'normal' a birth as possible.  What saddens me is that 'normal' and twin birth don't seem to go hand in hand with hospitals.  Reading Lucy Symons blog about a twin vaginal birth shows that the more things change, the more they stay the same. 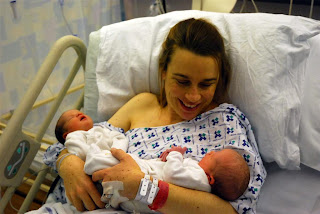 Why is fear the currency with which we talk to mothers?  Whose fear is really at play here?  Litigation seems to be the key word, following closely on the heels of risk management.  I was at a birth recently where a midwife was trying to shift the care of a labouring mum from the birth centre to the labour ward.  Her reasoning?  Mum had refused a canula (she had had a postpartum haemorraghe with her previous birth) and so on the advice of the risk manager - yes she used those words - Mum would need to go upstairs to labour ward.  The midwife threw a gown at her and brought in a wheelchair.  The canula had been refused because the midwife had tried to put one in earlier and caused so much pain that of course a second request was refused.  Long story short, the lead midwife examined her and couldn't get her fingers in because the head was right there.  Mum consented to the canula to keep the first midwife at bay.  It was inserted whilst she was contracting and begging to be left alone.  The baby was born within minutes and there was no bleed.

It's not just the twin mums that have fear induced births.  That 40 week Estimated Due Date is more and more seen as Delivery Day!  With no exceptions.  As a woman moves towards 40 weeks she begins to be offered sweeps and if the first sweep doesn't work, then she'll be offered another and then another.  Of course this does nothing to give her confidence in her body to birth her baby.  Heads are shaken, birth centres and home birth options begin to be withdrawn, or certainly threatened with withdrawal and induction dates are booked.  You either take your slot or you are condemned as an uncaring individual.

Jesusa says it better than me today.  I'm saddened by the continual bombardment of fear and yet... yet there is a ray of hope.  Today I'm enjoying Rebecca Schiller - The Hackney Doula's blog post about her time at the Birth Human Rights Conference in The Hague and the Initial Impressions of Dr Amali Lokugamage FRCOG.  As my gorgeous Sister Doula Maddie McMahon says "I smell change coming".